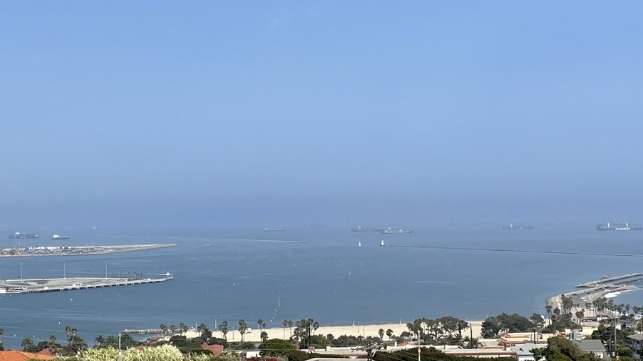 After months of reported progress on reducing the backlog at the two largest ports in Southern California, the congestion has again spiked to record levels. The Marine Exchange of Southern California, which oversees the movement of vessels at the ports of Los Angeles and Long Beach, reports that new records were set for the number of vessels in port and at the anchorage and despite slight declines they expect the volumes to continue at these elevated levels in the coming days.

“We set two records over the weekend,” says Captain Kip Louttit, Executive Director of the Marine Exchange of Southern California. “Regular and contingency anchorages remain essentially full,” he reported in his daily update to the maritime community while assuring everyone despite the record levels the port system remained safe and secure. Louttit writes the port system is “as efficient as can be under COVID-19 conditions due to the great work of all port partners and every segment of the workforce.”

The first record came on Friday, August 13, when there was a total of 125 vessels in port at the San Pedro Bay port complex. By Monday, it had declined just slightly to 116 vessels with 59 on berth and 57 waiting offshore in the anchorage or drift areas. Within the ships, there were 28 containerships on berth at the two ports while an additional 35 were waiting offshore. The total of 63 containerships, however, was just slightly below the absolute record of 67 on January 30, 2021, and the 35 at anchor was below the peak of 40 on February 1, 2021. By comparison, in 2015 there was a record 28 containerships in the San Pedro Bay.

For the second time this year, the Marine Exchange has also been forced to open drift areas because the primary anchorage and overflow areas are full. In January 2021, they opened the drift areas for the first time in seventeen years. Louttit explains that the drift areas are assigned working with the captain of vessels to chose a safe location at least two miles from shore and another vessel as well as the shipping lanes. Vessels are monitored in these locations for safety and offered positions at the anchorage when space becomes available.

Based on data from incoming vessels, the Marine Exchange reports that vessel arrivals are slightly below ”normal levels,” based on the 2018/19 pre-COVID level but remain high. By Thursday, August 19, 36 vessels are due, including 15 containerships, which is two fewer than the normal level of boxships. The number of vessels at anchor and in the drift area, however, is expected to decline with a total of 17 scheduled to go into the anchorage while 25 vessels are expected to shift to a berth.

The spike in the number of vessels is in part a reflection of the continued surge in imports as well as possibly some catchup from the disruptions recently at ports in Vietnam and earlier in the summer at Yantian, China. It is likely too soon for last week’s terminal closure in Ningbo, China to have a significant impact on traffic but should be reflected in the coming weeks as Southern California is a major destination on routes from Ningbo.

Two weeks ago discussing the volume of imports, officials at the Port of Long Beach described the levels as the “new normal,” noting that they had set records in 12 of the past 13 months for the number of containers handled in the port. The neighboring Port of Los Angeles in its Signal forecasting tool for imports shows peak volumes of 150,000 to 175,000 TEU a week currently with 24 of the vessels in the anchorage heading to Los Angeles. They are reporting, however, that the average waiting time in the anchorage has recently remained fairly steady at 6.8 days currently.

Reporting the forecast for retail imports, the National Retail Federation projected a peak in August before volumes would decline and plateau as retailers prepared for the end of year peak shopping season. 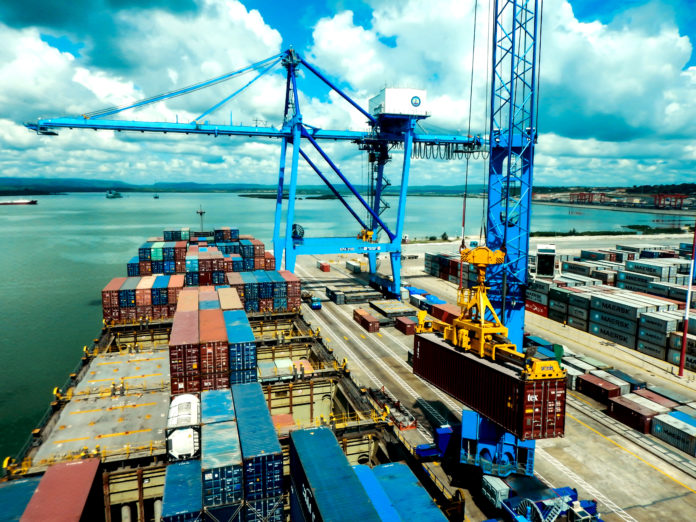 Gone are the days when being an non-vessel operating common carrier (NVOCC) or shipper owned container (SOC) box operator you could buy containers in any region, as per the need of any particular project of specific move, from one port to another, without facing any obstacle in getting space from vessel operators, port congestions and other loading issues, like vessel delay, port skip and roll over problems; but today it is not a piece of cake for non-vessel Operators (NVOs), to even find out the availability of containers, competitive price and get the space smoothly, in various regions including China/Europe and South East Asia.

One of the major reasons for these sorts of issues is Covid-19, which was confronted in 2020, due to which many countries had to implement a lockdown, started from China and moved on to Europe, the US and then spreading to almost all countries. Travel and transportation restrictions, came into effect all over the world, leading to sales & procurement dropped drastically, and so did global trade.

Nowadays, container shortages have become a serious problem in the logistics industries, which not only affect the global shipping industry but also have a strong negative impact on manufacturers, traders and of course retail businesses.

When countries entered into lockdown, their economic activities were restricted, including the number of workers in ports/depots/warehouses/container freight station (CFS), which were minimized extensively, in turn, this ultimately reduced the speed of cargo/custom handling, and clearing.

On top of that, many small and medium sized factories temporarily closed in different locations in Asia, mainly China. An event that led to a large number of containers stopped and became long-aging units at terminals and inland depots with the uncertainty of the next move.

As the movement of cargo was limited, shipping lines reduced the number of ships, to stabilize the cost and to maintain the freight levels, considering their major cost factors with blank sailings, which is another headache for NVOs/customers, as they have limited options of sailings from vessel operators.

But the main question still remains: “Where are the containers and why is no one able to access them easily let it be an NVOCC/freight forwarder or even a shipper?”

If I consider analyzing this situation, being an NVOCC and based on my practical experience, I understand that in most of the cases the containers are lying at ports/terminals and inland depots, leading to port/depot congestions, the same situation persists for all major transshipment hubs, like Singapore / Jebel Ali / Hong Kong / Busan / Shanghai / Colombo, etc. Simultaneously, the majority of containers are also onboard vessels for long haul, especially from China/South East Asia to US/Europe, hence the largest container shortage is in Asia, while Europe/Mediterranean also faces a deficit.

Due to these circumstances, vessels started omitting some ports, which is one of the common reasons for vessel delays; even if containers are lying at port for loading to a vessel, but are not able to be shifted over for sail, it leads to roll over to next sailing, without any certainty, as vessels right now are not being operated according to their fixed schedules; this is also the reason why containers are being moved via 1 or 2  transshipment ports, as an alternative route, which simply swaps the short transit time to a longer one.

On the other hand, whilst shipping lines were reducing the number of vessels, they were not able to collect empty containers at all.

Considering all these current factors and due to limited container access, manufacturers have driven up the prices of new containers, and the traders who sell second-hand containers have already created a hype in prices; this is a phenomenon not only in Asia/Europe but almost everywhere; therefore, cargo worthy containers which an NVOCC could easily buy in US$800-US$1200 bracket before 2020, now come in the range of US$2200-US$2800, likewise container leasing rates have also skyrocketed by 30% to 50%.

Apart from manufacturers and container traders, carriers/vessel operators are also trying to secure their profit, which is affecting container shortages, particularly in Asian countries. Carriers prioritize long haul shipments generally from China to North America and Europe where they can make more profit, as compared to short haul shipments within Asia, that’s why there are no empty containers in some regions.

Vessel operators are announcing general rates increase (GRI) for their carrier owned containers (COCs) and slots up to twice a month. On some routes, they even apply it on weekly sailings but still do not make any assurance that they will accept bookings and space on a regular basis which causes the ultimate war of space between NVOCCs who are also compelled to buy the slots on dead freight basis but are still subject to containers availability.

There is no need, to stress the fact that this is one of the toughest times for those internationally engaged in the logistics industry and nobody knows when this situation will return to streamline condition as according to some organizations and resources they anticipate that it may continue until the end of this year.

Nonetheless, we all have to survive and try to sustain our services especially NVOs/forwarders, by accepting and facing the current situations in terms of reality. At this point, all we can do is to explain the current logistics problems and situations to our customers, to get their understanding and do our best by focusing on what we can control, rather than to look at something we are unable to control.

Though I am uncertain as until to when we will have to face this situation or when the pandemic will be eventually vanished, however being a part of an NVOCC as VMR Lines, I am confident of playing a positive role in offering our services in every way possible, even if it means reducing the volume of our services, to some extent, but never compromise on its quality; we are committed to giving our customers, partners, agents, carriers and venders our 100%. 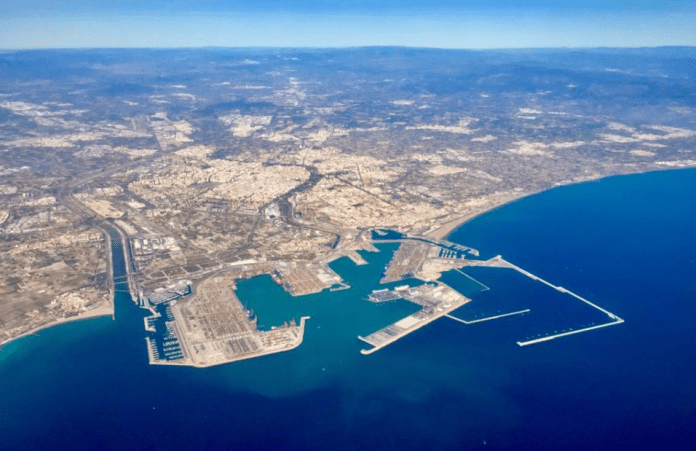 The Port Authority of Valencia (PAV) has announced the launch of a new electrical substation at the Valencia Port as part of its effort to achieve zero emissions by 2030.

Particularly, Valenciaport has published the procedure for awarding the contract for the construction of the connection for the electrical substation of the Spanish port with a budget of US$3,309,089 (€2,803,030).

At the same time, PAV is preparing the specifications for the construction of the electrical substation, with a base tender budget of more than US$7.7 million (€6,539,701.33) and a completion period of 24 months.

This new project will allow the ships’ engines to be connected to shore power while they are berthed at the port facilities, and it will serve different docks of the port, the northern container terminal and the public passenger terminal.

In addition, the substation project will boost the port’s decarbonisation process as it will play a significant role in the reduction of emissions and operational costs for ship calls.

The infrastructure involves the installation of two transformers in two stages, with a total apparent power of 60 Mega Voltamperes (30 MVA each).

Moreover, the new electrical substation has the support of the European Commission through the Connecting Europe Facility (CEF) Committee, which is financing the project EALINGWorks Valenciaport, such as the preparation of the port’s electrical grid for Onshore Powel Supply (OPS) to container ships, ferries and cruise ships in both the container and the passenger terminals.

The carbon footprint of the Port of Valencia has been reduced by 30% from 2008 to 2019, while this project aspires to achieve zero emissions at the port by 2030, “two decades ahead of the objectives that Spain, Europe and international organisations have projected for 2050,” according to PAV.